William Meade Lindsley Fiske III was born on 4th June 1911 in Chicago, Illinois [Editor’s note:  98% of sources list Billy’s birthplace as New York – wrong.  One only has to look at his grave stone, plus the papers in Britain at the time correctly listed it as Chicago.  Somehow the NY miscue has been passed along and became ‘fact’], the son of a wealthy banking family whose ancestors had gone to America from Suffolk in the seventeenth century. His early schooling was in the US but he went to university in England, at Trinity Hall, Cambridge, arriving in 1928 to study Economics and History. His studies were interweaved with sport of all kinds though his major accomplishment was winning, at the age of 16, a gold medal at the 1928 Winter Olympics at St Moritz, Switzerland. This was for leading the US bobsleigh team to victory and he would lead the team again in 1932 at Lake Placid, New York. In 1936 the Games were held in Berlin but Fiske relinquished his team place as he wanted nothing to do with the Nazi regime.

Golf was another major interest and this added to what we would now call his ‘celebrity status’ as he travelled to and from tournaments in his British Racing green 8-litre Bentley.

Working for the family firm Dillon, Reed and Co., he was sent by them to their London office in 1938. Here he combined work with taking flying lessons (there is evidence that he had undergone flying training while at home in the US too), qualifying in the same year, and getting married to Rose, the former Countess of Warwick. But early in 1939 the firm recalled him to New York.

Tension was already high following the German takeover of Austria and Czechoslovakia and on September 3rd England would declare war on Germany following that country’s invasion of Poland. One of Billy’s English friends in New York anticipated being called up and arranged a passage to England on the Aquitania for 30th August. This friend, William Clyde (also known as Billy), was already a pilot and member of the reserve RAF unit 601 (County of London) Squadron, Auxiliary Air Force. He is pictured below (photo courtesy Jack Riddle).

Billy Fiske opted to join him and on arrival enlist in the RAF. He was under no obligation to do so and in fact risked severe penalties should the US authorities choose to pursue and charge him with ‘fighting for a foreign power’.

Also at that time the RAF was not interested in recruiting non-British and non-Commonwealth citizens and Billy had to weave a complex story in order to pass himself off as Canadian. Despite being a pilot already he had to follow the military training programme and was posted to No 10 Elementary Flying Training School at Yatesbury, Wiltshire followed by a stint at 2 FTS, Brize Norton. While here he lodged his wife nearby at Minster Lovell.

On 12th April 1940 he was commissioned as Acting Pilot Officer and on 12th July was posted to his friend Billy Clyde’s squadron, No 601, at Tangmere, Sussex. It is fair to assume that this posting was the result of some more string-pulling by Fiske.

Fiske should have felt immediately at home as 601 had a history of recruiting from the members of Whites Club in St James, London’s clubland, and several of its core members had private means and came from prestigious families. But apparently Fiske was preceded by a playboy image and there was some doubt that he would be able to pull his weight. But within days his engaging character and above-average flying skills ensured that he was fully accepted. Unusually he had been posted to 601 without having flown a Hurricane and his first flight in one was on the 14th July. He had only accumulated eleven hours on this aircraft when he flew his first operational sortie on 20th July.

Further patrols ensued and on 13th August he claimed a Ju88 shot down.

On 16th August 601 was scrambled to intercept a formation of Ju87 Stuka aircraft that were in fact heading for 601’s base at Tangmere. Individual combats broke out as the Stukas dropped their bombs and headed out to sea over Pagham harbour.

Fiske’s Hurricane P3358 was hit, presumably by return fire from a Stuka’s gunner, but though the engine had stopped Fiske was able to glide over the airfield boundary and make a wheels-up landing. The aircraft immediately burst into flames. Two ground crew, Corporal GW Jones and AC2 CG Faulkner, drove an ambulance over to the aircraft, unstrapped Fiske and lifted him out. They had to extinguish a fire in his lower clothing before placing him on a stretcher and driving to the Medical building. Minutes earlier this building had received a direct hit and was extensively damaged.

Interviewed in 2003, the Medical Officer, the late Flying Officer Courtney Willey explained that he was inside and had been crushed by the chimney breast falling on him. Injured, but saved from a fatal blow by his tin helmet, he emerged from the ruins to be confronted by Jones and Faulkner bringing the stretcher bearing Fiske to him. With both eardrums punctured by the blast, Willey had to convey to them by sign language to take Fiske to Chichester Hospital. He first administerd a dose of morphine but said in 2003 that he was very pessimistic about Fiske’s chances of survival due to the severe burns to his lower body.

Fiske died the next day at the hospital. He was 29 years old. 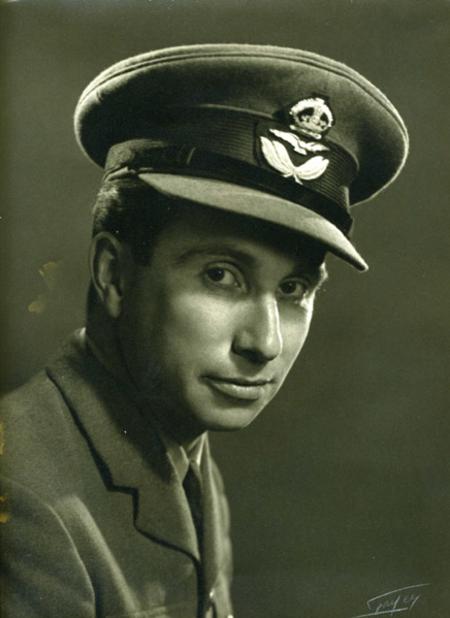 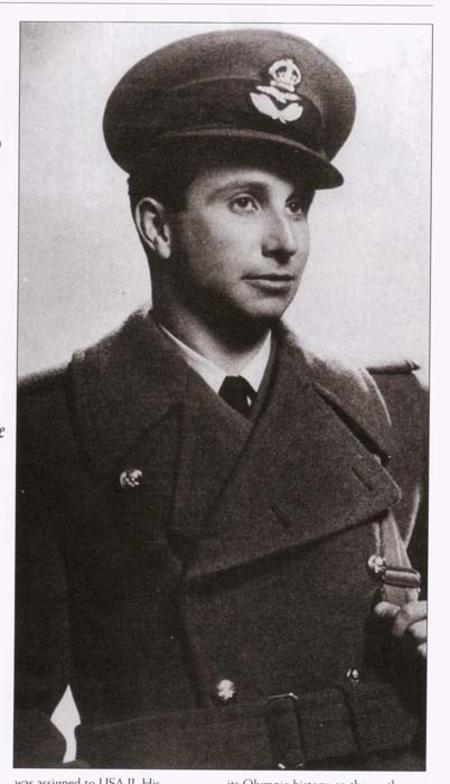 Another shot of Billy 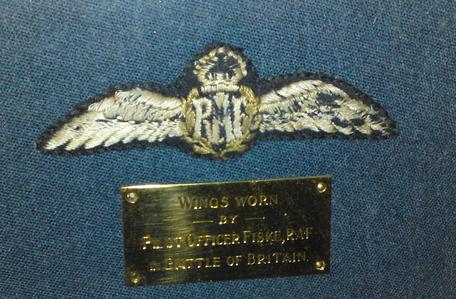 The wings from Billy’s tunic in St. Paul’s 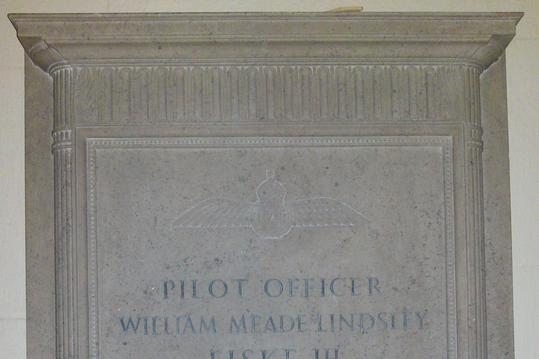 The plaque to Billy in St. Paul’s

These were from the collection provided by Bill Higgs – but think they belong here.  It’s interesting to note that while the ‘big deal’ made of Billy’s death at the time, and the plaque in St. Paul’s might have been political folly to try and hasten America’s entry into the war, we have never met anyone in 601 who served with Billy that did not like him immensely and think he was the finest of men.  That Bill Higgs saved these clippings from the war speaks a bit to that I think. 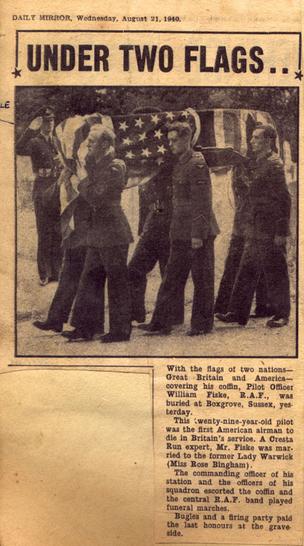 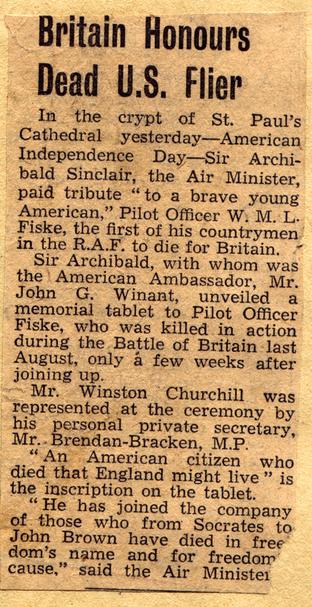 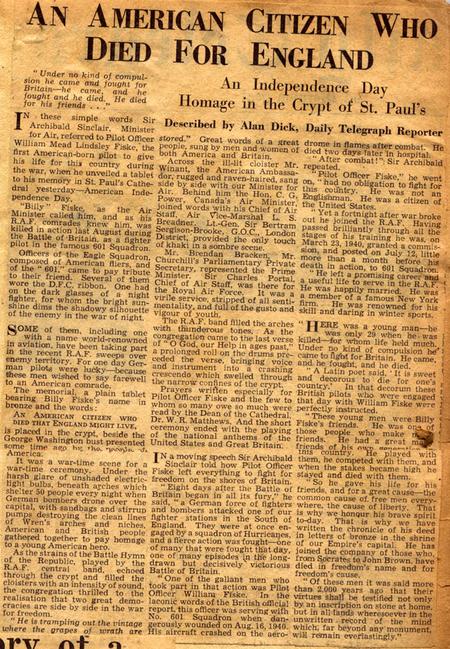 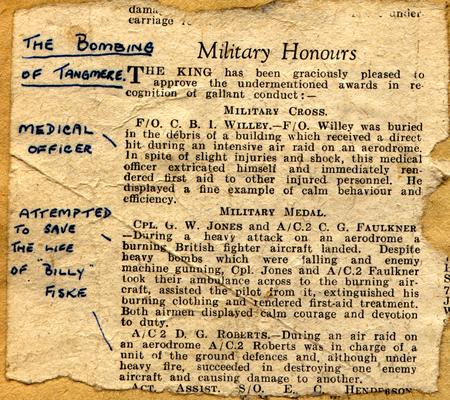