Eric Ralph Carrington Hobson was born on the 12th of February 1895 the son of LM Hobson.

He was educated at Lancing College from June 1908 to December 1909 where he was in News House. On leaving school he went to Trinidad.

On the 10th of February 1930 he was posted to the Directorate of Intelligence at the Air Ministry.
He was married in the summer of 1930 to Ruth Evelyn (nee Large) and they lived at “High View”, Derby Road, Caversham in Reading. He represented the Great Britain Rifle Team on their tour of Canada in 1931 and was a member of the Royal Air Force Small Arms Team. He joined the Depot at Uxbridge on the 1st of February 1932 and on the 21st of February he was posted to 57 (Bomber) Squadron based at Netheravon.

He served as an instructor to 501 (City of Bristol) Squadron and later to 601 (County of London) Squadron where he also served as Squadron Adjutant.

On the evening of the 1st of May 1933 Eric Hobson took off from RAF Hendon with three other Hawker Hart aircraft which included one flown by Lord Knebworth MP, a member of the Air Force Auxiliary serving with 601 Squadron, with Leading Aircraftsman Ralph Harrison. They were part of a formation of twenty seven aircraft which were practising for the upcoming Auxiliary Air Force display to be held on May the 7th. During a mock bombing run the aircraft crashed and burst into flames killing Knebworth and seriously injuring Harrison who died later in hospital.

At the inquest, which was held on the 4th of May, Eric Hobson attempted to take the blame for the accident. With a voice said to have been trembling with emotion he explained that he had not been undertaking “stunts” but giving a bombing demonstration from a height of 2,000 feet, pulling out of the dive at the customary 500 feet :- “I was leading a V shaped flight of three planes. I began to pull out of the dive at 600 feet. Somehow I continued to lose height, until dangerously near the ground. Knebworth was obliged to follow me. He had not a good view of the ground. I cannot satisfactorily explain what happened except by saying that I suffered a “blacking out” by which in high speed flying the mind ceases to function for a fraction of a second. I mention this, not as an excuse, but as a possible explanation. Whatever may have been the reason for the error of judgement it was not carelessness or recklessness.”

It was suggested to him that an air disturbance caused by thunder may have contributed but Hobson replied that the air had been calm at the time.

The Coroner, Dr J.A. Gorsky, paid tribute to him in his summing up saying about his:-“very generous and sportsmanlike action” in attempting to take the blame for the accident but said that he did not do himself justice adding in his summation to the jury:-“You have heard that there is such a thing as blacking out during which for some reason or other, the mind temporarily becomes slightly blank. It may be only for a second or two. Those who have been flying realize that one or two seconds can be quite sufficient. None of us will ever know exactly what did happen. I think, rather than to suggest it was an error of judgement, it would be more generous to say it was an Act of God. A verdict of “death by misadventure” was recorded.

In June 1934 he was appointed to air staff duties in the Middle East. He had previously commanded 33 (Bomber) Squadron before being seconded. He was promoted to Squadron Leader on the 1st of February 1936 and on the 14th of March he was posted to the Royal Air Force Aircraft Depot at Karachi.

On the 20th of January 1937 he was appointed as Commanding Officer of 6 (Bomber) Squadron based at Ismailia where the squadron were deployed in response to increasing tensions between the Arabs and the Jews.

On the 31st of January 1938 he was awarded the Distinguished Service Order for services in Palestine which was announced by the Air Ministry on the 6th of May 1938. The citation read:-

“For gallant conduct in action against armed bands at Umm El Fahm on 31st January 1938.”

In the London Gazette of the 23rd of December 1938 it was announced that his name was brought to the notice by the General Officer Commanding British Forces in Palestine and Trans Jordan in recognition of distinguished services rendered in connection with the operations in Palestine during the period 12th of September 1937 to the 31st of March 1938.

He was found shot dead in an office at Ramleh Aerodrome in Palestine with a revolver lying next to his body. Initial reports suggested that he had been killed by an Arab but it was quickly established that this was not the case. 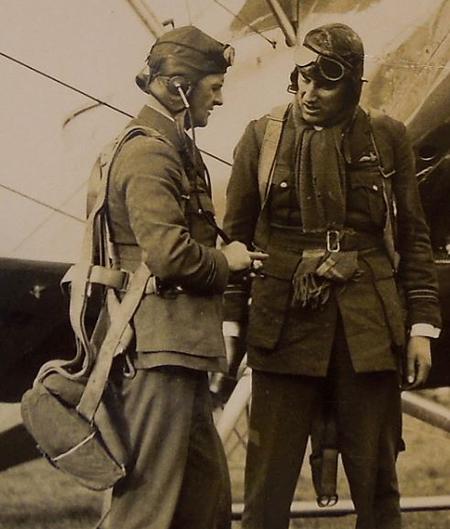 Eric Hobson on the left.