Roger Bushell is famously remembered as “Big X”, the mastermind and driving force behind what is arguably the most audacious prisoner of war escape of the Second World War. The story of the breakout later became immortalized on film in “The Great Escape”, based on the best-selling book of the same name by fellow prisoner, Paul Brickhill. This has largely overshadowed other aspects of his life, his pre-war flying experiences and his, albeit, short wartime role within the RAF.

Roger Joyce Bushell was born in 1910 in South Africa to an English goldmining
engineer. At the age of 10 he was sent to boarding school at Wellington in England. Following this he spent time at Grenoble University, becoming a proficient linguist in French and German before going to Cambridge in 1929. Whilst there, he indulged in his non-academic passions including acting, rugby and skiing.

It was also whilst at Cambridge that Bushell took up his other great passion:  flying. In 1932 he joined 601 Squadron Auxiliary Air Force as a Pilot Officer.  601 Squadron was otherwise known as “The Millionaires’ Squadron” because most of its members were wealthy young men, paying their way to learn how to fly at the weekend. Many of these men were also fellow skiers, such as Max Aitken, who joined the squadron in 1934 following some encouragement from Bushell.

Bushell won his wings in June 1933 and was promoted to the rank of Flying Officer 8 months later. On graduating from Cambridge with a law degree, Bushell was called to the Bar in 1934. His legal skills were also called upon in the RAF, usually for the defence of any airmen whether regular or auxiliary. In fact he won so many cases, thereby embarrassing the authorities that the Air Ministry wrote to his commanding officer saying that he was no longer permitted to act as defence counsel in court martial cases! Meanwhile he was rising through the auxiliary ranks, being promoted to Fight Lieutenant in 1936.

On 10th October 1939 92 Squadron was re-formed, initially as a Night Fighter Squadron, at RAF Tangmere. On 12th a signal was posted stating F/Lt. Roger
Bushell was to command the Squadron, making him the first Royal Air Force Auxiliary officer to be put in command of a regular squadron. When he arrived on 15th he found there were no aircraft, no tools and only a handful of ground crew. Bushell quickly set to work as the pilots trickled in. Even with the delays in supplying the squadron, Bushell made sure that his pilots and ground crew were practised in start-ups and scrambles. He drove everyone hard; including himself and it was noted that “the old man”, as his pilots called him, always beat them in the practice scrambles. In showing his squadron that he would not ask them to do anything that he himself wasn’t prepared to, he won their respect and admiration. Under his influence, 92 Squadron was moulded into a formidable fighting force. Brian Kingcombe, a later member of the squadron, noted how the pilots who had served under Bushell spoke of the example he set, the way he boosted morale and his inspirational leadership.

On 9th May 1940 the squadron moved to Northolt and finally became operational. On 23rd May 1940 whilst on leading a sortie of 12 spitfires over the skies between Dunkirk and Boulogne, Bushell was set upon by 5 Messerschmitts. He managed to shoot down 2 but in the process his plane was hit so he glided it down over what he believed was friendly territory. He emerged from his smouldering aircraft with a bleeding nose and flagged down a passing motorcyclist who turned out to be a German soldier.

The words, “For you the war is over” held no meaning for Roger Bushell. He did not just believe it was every officer’s duty to escape, he saw it as an intrinsic right granted by the Geneva Convention. He applied the same inspiring leadership qualities he had used in building up 92 Squadron into planning and executing the largest prisoner of war escape of the Second World War.

After several failed escape attempts, Bushell was sent to Stalag Luft III, a camp specially constructed and manned by the Luftwaffe for allied airmen who were notorious for escaping. Other inmates included Wings Day, Douglas Bader and Robert Stanford Tuck, who had been with Bushell at 92 Squadron. When Bushell arrived he was told that if he tried to escape again he would be shot. Despite this strong warning, he was undeterred. After his last failed attempt he had wound up in the hands of the Gestapo and this experience had left him scarred but resolutely determined to mount an escape on an epic scale.

Bushell took control of the escape committee, being appointed “Big X” and set about a program of centralising all escape activities. Up until this point in time, escaping had been a private enterprise activity, with a few individuals uniting their efforts. Bushell decreed that all escape activity was to become centralised under the X organisation and all small scale escape plans would have to be authorised. A collective effort would be channelled into one large endeavour with the aim of getting up to 200 men out, thereby causing a massive disruption and reallocation of German troops to re-capture them.  Bushell’s indomitable style meant he was able to cajole, convince and even bully fellow prisoners into accepting this new regime.

Bushell’s idea was that, not one but, three tunnels named “Tom”, “Dick” and “Harry” would be dug from different locations within the camp. If one was discovered by the Germans then they would still have two others in reserve.  The X organisation under Bushell consisted of different departments including diggers, security, scroungers, penguins who were responsible for disposing of the tunnel dirt, forgers, engineers and mapmakers. Maps, clothing, rations and passes were produced with meticulous attention to detail, making resourceful and innovative use of the limited material available to them. On the night of 24th March 1944 76 men managed to escape from the tunnel codenamed “Harry” before being discovered. Of these, only 3 were successful in making it back to allied territory. The remaining 73 were recaptured. Hitler was so incensed by the escape that he wanted all the recaptured men to be
shot. However this was modified under the “Keitel Order” and 50 of these men, including Bushell, were executed and their remains cremated.

Whilst the escape was not on the scale Bushell had envisaged, it did succeed in creating a chaotic situation for German High Command, forcing them to divert manpower away from the war effort to recapture these escaped airmen.  Until recent years most people only knew the story of The Great Escape through the highly fictionalised film made in 1963. However, over the past 10 years the true story of the escape and the name of Roger Bushell have become better known in the public sphere. The most recent example being a documentary film entitled “For Which I am Prepared to Die”, offering a personal and biographical account of Bushell, produced by his niece. Bushell’s legacy matches the motto of the RAF, Per Ardua ad Astra (through struggle to the stars). Whether building up a squadron from scratch with
limited supplies and crew or planning the biggest prisoner of war escape of the Second World War, Roger Bushell toiled and struggled but always reached for and demanded nothing less than the best.

Note:  This is but one account; there are tons of things out there written on Roger and ‘The Great Escape’ as it came to be known.  For instance a recent book by Simon Pearson makes the suggestion that Roger acted essentially as a spy whilst prisoner of war.  Roger Bushell was an amazing an interesting person, and his story within the larger tapestry of the Second World War is certainly one of the more remarkable ones. In time we will add to this narrative to build an accurate portrait of the man, but this has been done in so many other narratives and venues that perhaps it is best left to them.  Roger’s time in 601 Squadron would prove him remarkable enough and is our main concern.

An early shot of 601 with Nigel Norman as Flight Commander. A very young looking Roger Bushell stands in the back row, far right. 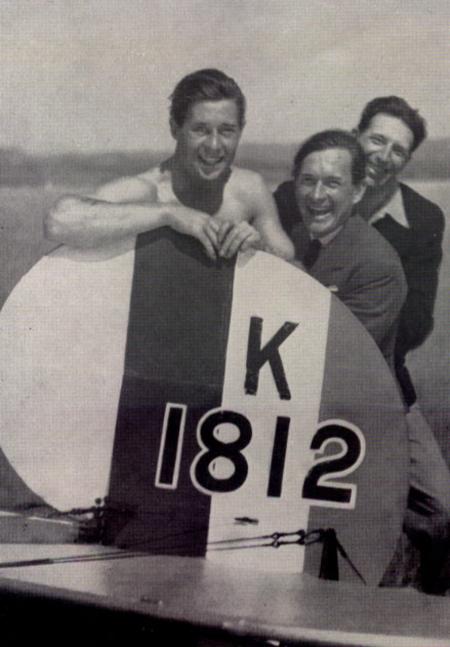 Well-used shot of Roger behind the tail of a squadron aircraft. With John Hawtrey and Nigel Norman. 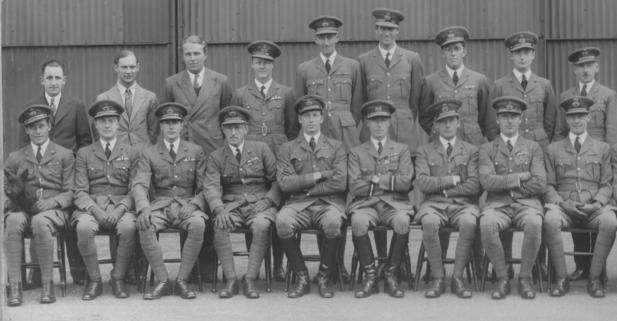 Roger seated on the far left (with dog) 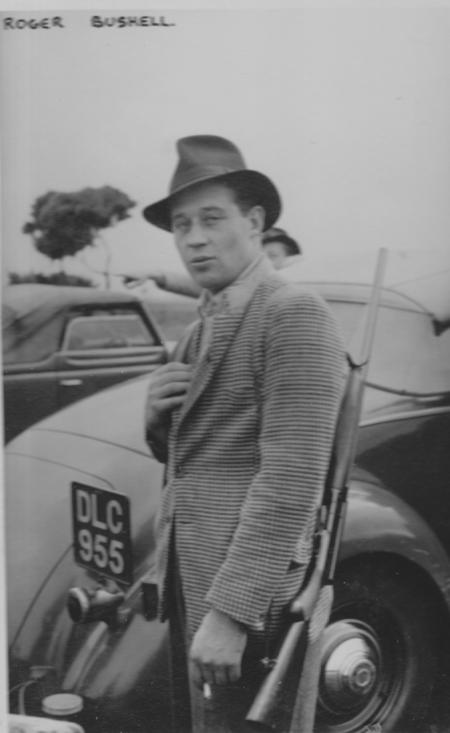 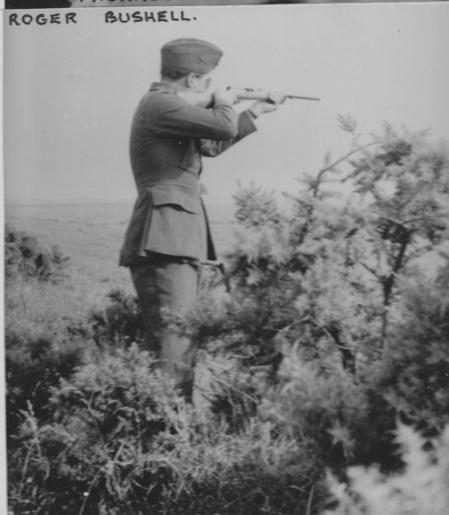 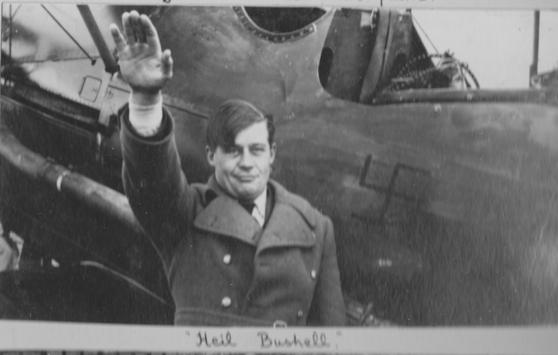 1938 – he far outranks the dirty little corporal at this stage 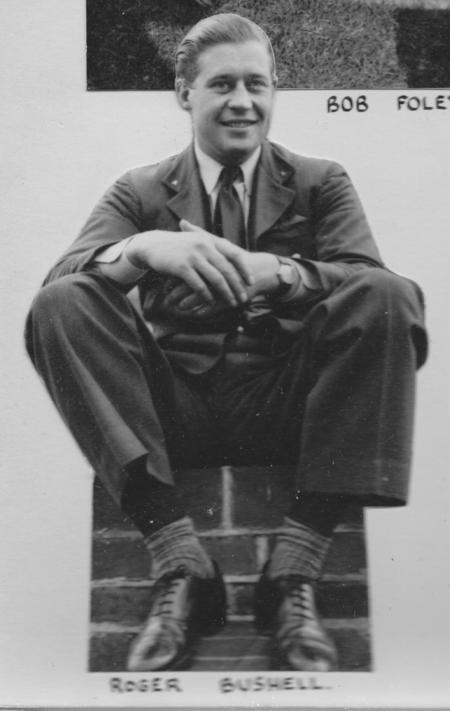 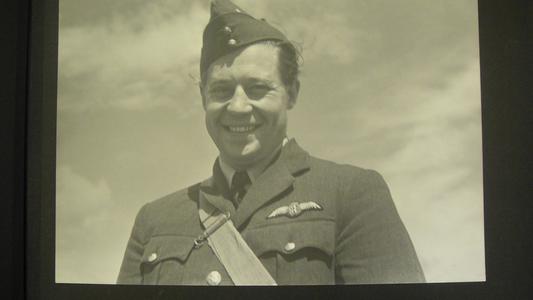 Great shot of the great man. 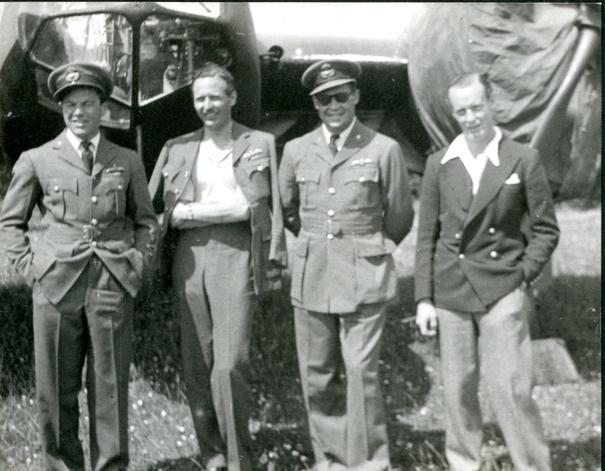 Last of the happy days – 1939 with friends/squadron-mates in front of a Blenheim. Left to right – Max Aitken, Brian Thynne, Roger Bushell, Willie Rhodes-Moorhouse 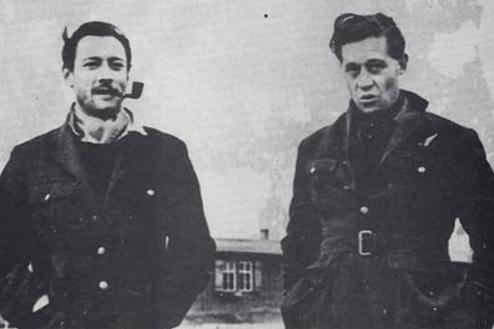 With Bob Stanford Tuck – showing the ravages of being a POW