ANSON flying was seldom glamorous, but in August 1940 No 48 Sqn, RAF Coastal Command, performed the vital role of convoy escort, shepherding ships in and out of Liverpool and the Clyde as well as covering the area around the northern Irish Sea in case some enterprising Uboat commander decided to prowl around that area looking for targets. Based at Hooton Park, Cheshire, No 48 Sqn had already distinguished itself by introducing the first monoplane with a retractable undercarriage into the RAF – the Anson Mk 1 – and over Dunkirk in May had even shot down an interfering Messerschmitt Bf 109E. Now, as the Battle of Britain was being waged down south, the
squadron was also giving youngsters arriving as ground crew their first experience of flying, one these being 18 year old George Coleman, a recently trained armourer. George notched up 55hr flying from Hooton as a turret gunner, plus five hours in the Westland Lysander IIs of the co-located 13 Sqn which was ‘resting’ by flying ASR and anti-invasion patrols after taking a recent mauling in France.

In May 1941, George Coleman was posted to No 601 (County of London) Squadron equipped with Hawker Hurricane IIb bombers, initially stationed at RAF Manston before moving as one of the rear party to Matlaske in Norfolk. The transfer to this bleak East Anglian airfield was in preparation for the squadron’s transition to a new aircraft, the Bell P39 Airacobra which was expected to enhance the combat capability of RAF Fighter Command. The first two of these American center-engined fighters arrived on August 6, 1941, and the ground crews as well as the pilots began to work on the type to make it combat capable for service in Europe. For George Coleman, the Airacobra’s armament was his area of responsibility, comprising as it did two 0.5 in machine guns in the wings, two in the nose and a single 20mm cannon firing through the centre of the propeller hub. Ever keen on taking any opportunity to fly, George made short local flights in the squadron’s Miles Magister and the impressed General Aircraft Cygnet (the nosewheel design was provided to train the pilots on this, then, novel undercarriage arrangement) with Sgt Briggs and Flt Lt Himr, two pilots who found little to like about the Bell fighter. Briggs was to make a belly landing in the type at Mildenhall after the electric circuit jammed the undercarriage in the ‘up’ position, while Himr experienced a fracture of the main prop shaft forcing him to land at Marham.

Persevering with the Airacobra and determined to make it work, the squadron moved to Duxford ten days later. More incidents occurred but undeterred by the scepticism being expressed by the squadron, Fighter Command decided that the type should be tested in combat so four were detached to Manston for trial operations in October. George and other members of the ground staff accompanied the deployment in a Bombay transport, but six days later the detachment all returned to Duxford. The result had been less than promising with only one ground strafing mission being flown along the Belgian coast before the trial was halted. In January 1942, with snow blanketing much of the country, No 601 Sqn moved north to the newly completed Yorkshire airfield of Acaster Malbis, but technical problems with the Bell fighter continued until in March, the unloved and unsuccessful Airacobra was withdrawn from RAF service. The aircraft were crated and sent to Russia where they helped modernise the Soviet Air Force. With the departure of the P39s, No 601 was highly relieved to reequip with Spitfire Vbs, moving to Digby with a new commanding officer, Sqn Ldr Bisdee, in preparation for its transfer to a new war theatre and the Mediterranean.

The beleaguered island of Malta was in desperate need of reinforcements and No 601 was to be part of this effort. Pilots and aircraft sailed from the UK aboard carriers before making the hazardous flight east along the Mediterranean to the bombblasted British outpost between Italy and Axisheld North Africa. As the squadron’s ground complement was not needed on Malta, it transferred by ship via South Africa and Aden to establish itself in Egypt by June 1942 when air and ground elements were
reunited as part of No 244 Wing, Desert Air Force. Heavy fighting halted the Axis advance on Cairo and in October, the battle of El Alamein reversed German and Italian fortunes in North Africa and by November 12 the Eighth Army had retaken Tobruk.

The Allied success in defeating the Afrika Korps meant an exhausting experience for the RAF ground crews as they supported the squadrons moving from one barren stretch of desert to the next. Initially flying armed reconnaissance missions, the Spitfires were adapted to carry bombs from early in 1943, requiring intensive support from the ground crews. It was during the final weeks of the North African campaign that George Coleman heard that his long sought after request for aircrew training had been accepted and in June 1943, he returned to Cairo and embarked in a BOAC Empire flyingboat on the first leg of a journey via Johannesburg to RAF Moffat, Gwelo, Southern Rhodesia.  Here, in September, he began a two month course with No 24 Bombing and Gunnery Navigation School, flying in turreted Ansons and Airspeed Oxfords to hone his skill as an air gunner. Course completed, George transferred to Aqir in Palestine in November ’43 for 40hr of gunnery training on Vickers Wellington Mk IIIs and Xs with No 76 OTU. This was also when he teamed up with four others to form a crew. They were Flg Off Denys ‘Chalky’ White (pilot), South African Lt George ‘Bunny’ Hunt (navigator), Flg Off Paul ‘Pin’ Wheatley (bomb aimer) and Flt Sgt Robert ‘Dai’ Evans (wireless operator). By the end of January 1944, George had qualified as a fully fledged tail gunner and after two months leave, the fiveman crew found themselves posted to B Flight of No 150 Sqn, based at Amendola in Italy.

Operating from one of the clutch of airfields on the Foggia plain, 150 Sqn formed part of No 205 Group with another five squadrons and had been flying Wellingtons since October 1940, first in the UK and from December 1942 in the Mediterranean. By the time George Coleman arrived, the squadron was well into its night role of attacking German targets in Northern Italy and across the Balkan countries to aid Russian operations against Romania. Its bombing accuracy drew an official message from Maj Gen ‘Jimmy’ Doolittle late in 1943. ‘The work in the theatre of 142 and 150 Squadrons of 330 Wing has been outstanding. The phenomenally high operational rate and efficiency of the Wimpeys contributed materially to the success of the campaign. I am proud to have been associated with this fine organisation.’

On April 10, 1944, the crew flew its first operational night sortie, a 5hr 30min round trip mission to Piombino, northern Italy. The target was the town’s marshalling yards and docks for which the aircraft, JA351 nicknamed Flak Happy, carried nine 500lb high explosive bombs which were released in three sticks. Two nights later, the rail yards in Budapest, Hungary, were the target during which a night fighter was seen and successfully warned off with the help of 1,000 rounds of .303in.  Although no claim was made it was George’s baptism as a gunner. On the 15th, the yards at Turnu Severin in Romania were attacked with the highly satisfying spectacle of smoke billowing up to around 7,000ft from what was believed to have been vital fuel wagons.

The Wellingtons flown by the squadron were mainly Mk Xs powered by 1,615hp Bristol Hercules VI or XVI engines. The last of the bomber variants of Barnes Wallis’ famous geodetic design, the Mk X incorporated improved aluminium alloy in its construction which significantly increased its weight-carrying ability. While the Wimpey was no longer a main force aircraft with UK based Bomber Command, it still proved to be a reliable and established workhorse with the Italian based squadrons.

On the 20th it was the turn of San Stefano yards and docks, but they escaped the RAF’s attention that night as aircraft were recalled to base due to bad weather and bomb loads were jettisoned. Then, on the 1st of May WWhiskey was hit by flak on a trip to Alessandria in North Italy. It was a close call for George as the fuselage just in front of the rear turret was peppered with fragments of the antiaircraft shell, while a hit on an aerial knocked out the IFF. On the return journey George in his isolated position was getting jittery and kept reporting night fighters on the rear starboard quarter at about teno’clock.  However, they made it back and on inspection after landing, it was found that an aerial wire with fabric attached was trailing behind the aircraft – sometimes above, sometimes below his field of vision, giving the impression of another aircraft in close proximity – an ageing experience for a ‘Tailend Charlie’!

Four days later it was another seven hour round trip to batter Budapest again, but this time it was more frightening. They found themselves coned by searchlights on the bombing run to the marshalling yards and after taking evasive action to get back into the enveloping darkness, a Junkers Ju 88 was seen moving into an attacking position behind. A few hundred rounds from the Brownings, helped by some smart flying by skipper ‘Chalky’ White, soon lost him and they made a safe return to base. So the missions to destroy the German’s rail network continued Bucharest on May 6, Budapest on the 10th and a road junction at Valmontone, Italy, to support the Allied push on Rome on the 23rd, all with little opposition from the enemy fighters or flak, but a collision over the target between two of the attacking force highlighted the hazard of flying bombing operations at night. On May 29, the crew made its first visit to Austria with an attack on Feuersbrunn airfield, recording fires around the dispersal areas. On the return leg, brief sightings of a marauding Ju 88 and a Bf 109 were made, but no hits were received or claimed and they disappeared following some tight flying. 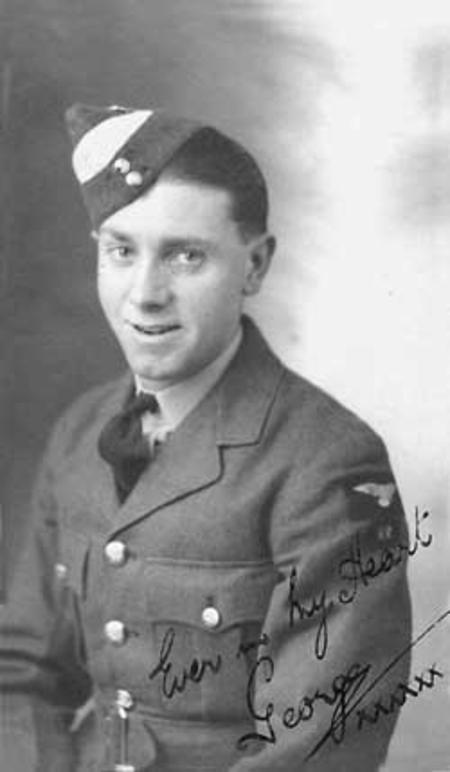