In 2009 when a small group of us ventured to London for the unveiling of the flying sword statue at Hendon, a rather handsome and quiet man approached with his wife, and introduced himself as Michael Hyett.  By his medals and badges, he had quite obviously been in the Squadron and served during the war.  Very fortunately for all of us, Michael took the time to write up a short narrative of his experiences.  His words say more than I ever could.  I’m quite proud that we got to meet this lovely gentleman.  Michael passed away in early 2012.

I was fifteen years old and still at school in South Woodford when war broke out in September 1939. After nine months evacuation to the countryside I returned to London in July 1940 to attend a Technical School for one year. That summer, as I lay on the grass watching the Battle of Britain overhead, a fascination and a longing to be a fighter pilot grew inside of me. Watching the condensation trails across the sky and hearing the machine guns, as the Spitfires and the Hurricanes engaged the German planes, my friends and I were oblivious to the dangers. I only knew that it seemed far less dangerous than fighting in the trenches!

When I was seventeen and working in a bank I tried to volunteer as a pilot, only to be told to join the Air Training Corps and to try again when I had turned eighteen. Day after day I would avidly read the latest reports on the Battle of Britain, my desire to be involved in the ‘action’ still driving me on until, finally, I turned eighteen and enlisted, having passed my medicals. In February 1943 I received my calling-up papers and went to the receiving centre at Lords Cricket Ground in London. I was kitted out and sent to Scarborough for elementary training, flying for a few hours in Tiger Moths at Brough.

We sailed from Greenock in Scotland in September 1943 and into the Atlantic to dodge the U-Boats. It took eight days to reach Gibraltar and then we sailed through the Mediterranean, finally docking at Suez in Egypt where we were off-loaded into a transit camp as the ship, one of the Castle ships, I think the Llangibby, was needed in the invasion of Italy. We understand that it was sunk. After three weeks in the desert, we continued by the Highland Brigade down to Durban in South Africa where we stayed in another transit camp for another few weeks before travelling by a wonderful train up to Bulawayo in Southern Rhodesia where we did a short refresher course in ground subjects. We then went up by train to Salisbury, now Harare, where we did our elementary flying training in a single-engined Canadian trainer called a Cornell. After completing 85 flying hours of dual and solo flying, I went onto Cranborne in March to do my advanced flying on Harvards where I did another 190 hours flying training and passed out, receiving my service wings on the 3rd November 1944.

After a wonderful three weeks with several Rhodesians, game shooting in the Zambesi Valley, we flew up in stages to a rest camp in Heliopolis at Cairo and then onto an Operational Training Unit at Ismalia in Egypt near the Nile. It was called 71 OTU (Operational Training Unit). Here, after a few hours on Hurricanes, we graduated to Spitfires which were much lighter on the controls and produced a `bucking bronco’ when I took off, as the Harvards and Hurricanes needed heavier handling.

In early April 1945 I joined up with 601 County of London Squadron, which had already been at Bellaria in north-east Italy for five months, under the command of Wing Commander ‘Cocky’ Dundas. With the war entering its final phase the Germans were entrenched on the banks of the River Senio and British troops needed strong air support to help drive the Germans back across the River Po and out of Italy.

Our task was to cut off the supply line of ammunition to the German front, by bombing and blowing up bridges across the River Po, and destroying any potential ferries or transporting vehicles.

The breakout across the Senio began on April 9 1945, the Wing flying 121 sorties that afternoon in an uncompromising bombardment on the German targets. For eighteen days the attacks, with two or three sorties continued relentlessly, day in, day out, from dusk till dawn. Although most of the time the assault was constructive, destroying pre-selected targets, we increasingly went on free-ranging missions as the enemy dropped back, targeting anything that could possibly be construed as enemy transport, even down to horse and ox-drawn wagons.

In total the Wing flew 4644 operational hours, comprising 3661 sorties; 851 bombs were dropped; 345,380 rounds of 20mm cannon; and 804,291 rounds of machine gun ammunition were expended. At the beginning of the mission we started out with between 90 and 100 aircraft. By the end, anti-aircraft fire had claimed fifty-five of our aircraft, and another 41 were so badly damaged that we couldn’t repair them ourselves. A further 31 were also damaged badly. Nine of our pilots had been killed, and three were missing, one of whom was a Prisoner of War. Three more were injured and several baled out behind enemy lines and were able to return.

Hugh (Cocky) Dundas, now a Group Captain and the youngest at age 24, said in his book `The Flying Start’ that the last four to six months of the war in Italy were, in his opinion, the most dangerous and terrifying period of the war. Not only were the Germans now extremely accurate in their ground-to-air firing, but a consignment of 500lbs bombs that we used had faulty detonators and at least two of our pilots blew to smithereens in bomb dives. (See pages 159 — 161 of `The Flying Start’, a book by Hugh Dundas)

My role in the assault, however, ended on 20 April, the day before my 21 birthday, and on the day that would turn out to be Hitler’s final birthday. We were on a sortie to bomb a position northeast of Bologna on a stretch of road that was entrenched with heavy German guns.Having dropped our bombs by dive-bombing from 6000 feet down to 2000 feet we circled the area and found at least one of the guns. We came into strafe and, on the second run in, I felt the aircraft being hit and buffeted around. ‘Phoning’ Flt Lt. ‘Johnnie’ Johnson I was told that my plane was pouring out smoke and oil and that I should put down in a field that was on our left.

The field looked perfect with beautiful lush grass and I didn’t anticipate any problems, other than those normally associated with ‘crash-landing’ a fighter plane!  What I hadn’t realised, however, was that under the grass were irrigation channels. As I approached to land one of my wheel legs which was hanging loose caught in one of the channels. The starboard wing was torn off as the aircraft somersaulted ten times, breaking into three portions, before coming to a standstill, cockpit uppermost with yours truly apparently lifeless in the seat.

My fellow pilots circled above me in the sky until a jeep arrived from the nearby Welsh Regiment to take me, first to a farmhouse called Cuazzaloca, and then onto the Army hospital at Rimini. My mother used to say that the long journey, whilst I was unconscious, along rough track by jeep to Rimini couldn’t have helped much. I was not expected to recover from my head injuries and was left unconscious, in a fetal position for eight weeks. A lack of medical knowledge in those days meant that the head injury was left to heal by itself and I was often left hungry, as the nurses were so busy with other patients. I was unable to feed myself as both arms were in plaster and over time my weight dropped to five stone.

In July 1945 I travelled by ambulance train to Naples from where I was flown back to Shenley Hospital in northeast London where my cousin would visit to feed me, before being transferred to No.1 RAF Hospital at Halton. It was a miserable time; the head injury had caused paralysis down one side of my body; I had little memory; and I was unable to read. A minor speech impediment that I had had before the accident had developed into a serious stammer; and the head injury had also stimulated bone growth on my elbows, which required an operation once the plaster had been removed. I only recovered 75% of their movement but I now have severe arthritis in both my wrists also.

After rehabilitation at Chessington I was invalided out of the RAF with 100% disablement in July 1946. However, the process of my recovery was to be a long difficult path, taking many more years.

Following my retirement from Lloyds Bank Foreign Department in 1982, I began to get a strong urge to seek out the location where I had crashed. And, thanks to an historian at the Public Records Office at Kew, I was able to identify the village of Tombiazza, near Medicina, east of Bologna in northern Italy. I wrote to the Mayor of Tombazza, and also requested help from the Italian Air Attache in London. Within a matter of months arrangements were made for an emotional return to the area that had so affected my life.
In April 1999 I returned to the place where fifty-four years before my life had been dramatically changed forever. Following a flight over the old battle zones in a light aircraft, my host Bernado Cattani took me to the very field where my plane had crashed. There was a row of cars, and people standing there, along with two journalists and, to my amazement, four people who had witnessed the crash. It was an emotional moment.  And on the penultimate evening Bernado threw a big party for local war enthusiasts, and the four witnesses to my crash. To complete a very emotional four days for me, into the party was carried an eight foot length of my Spitfire’s fuselage, peppered with bullet holes, which had been used for 54 years as a dog kennel!  The fantastic four days I spent with the Cattani family will live in my memory forever. 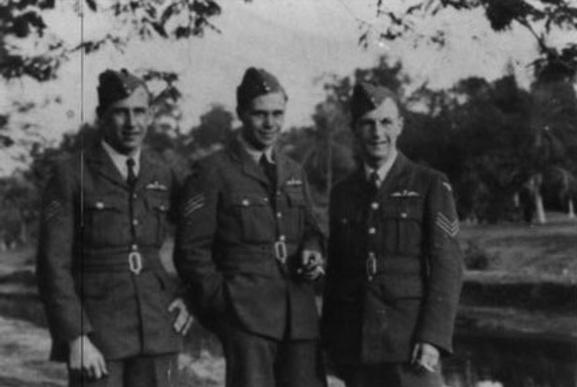 Michael in the center during the war 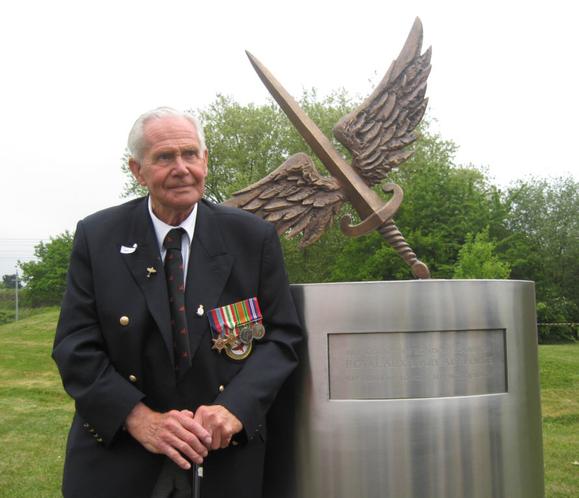